Every project involves costs. The larger and more complex the project, the more costly to execute in terms of time and money. Because no company has unlimited resources, every project requires a Project Budget.

A Project Budget is the total projected costs needed to complete a project over a defined period of time.

The goal of budget management is to control Project Costs within the approved budget and deliver the expected project goals.

Having a Project Budget plan is important for three reasons:

Cost Centers are the main tool used in Sciforma to manage the budget and reconcile costs.

Cost Centers allow you to define the company’s budget. This Budget is then broken down and hierarchized as Cost Centers, allowing users to allocate the Budget throughout the system, both at the Portfolio and Project level.

A Cost Center can hold a budget either in terms of money (cost) or Effort.

The budget type (cost and/or effort) has to be set by the Administrator in the System Settings workspace, Budget/Finance Settings folder.

Cost Centers have two Workflow State Votes: “Active” and “Inactive”. Once a Cost Center is Inactive, users will not be able to allocate it. However, Cost Centers whose status becomes Inactive after being allocated to a project will be managed the same way as if the Status were Active.

The project manager is responsible to estimate the Budget required to complete project tasks. The Project Manager should allocate all costs to project tasks, and all aspects of the project, including the cost of internal and external human resources, equipment, travel, materials and supplies, should be incorporated.

In Sciforma, it is possible to define the Project budget using three different approaches.

The Bottom up approach requires estimating the individual tasks and the cost of each input and is adding them up to get the Project Total Cost. A detailed WBS (Work Breakdown Structure) is needed to determine all the tasks in the project and determine all required resources such as personnel, equipment and materials.

Bottom-up estimation is one of the best and foolproof ways to prepare a project budget, but could be time consuming.

The Top down approach is a Budget estimate when the Total Project Budget is known and the project needs to know the costs of each individual task. In this scenario the project determines the number of tasks or outputs the project can produce with a given budget. A fixed budget is then broken down using the WBS (Work Breakdown Structure) to determine the number or quantity of tasks that can be achieved with the budget.

This approach uses standardized values that define the costs of a task by choosing a pivot.

For further information, please refer to the Forecast topic.

Once the project budget has been reviewed and approved the next step is to create a Budget Baseline.

The baseline is a time-phased budget that Project Managers use to measure and monitor budget performance.

The Budget Baseline will be used to control the budget using the Earned Value calculations to determine how the project is performing according to the progress made.

Budget controlling is the activity to see if the project expenses are being executed according to the budget plan and helps identify deviations and develop corrective actions.

This is often done through the Earned Value Analysis.

The Earned Value Analysis (EVA) is a method that allows Project Managers to measure the amount of work actually performed on a project beyond the basic review of cost and schedule reports. 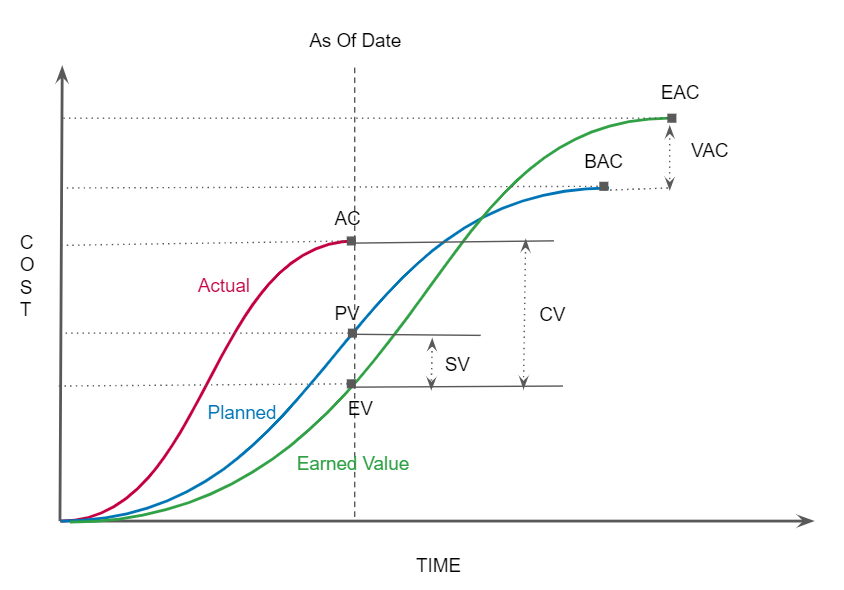 With this analysis, you will be able to analyze:

In the context of Business Management, it is apparent that in the same company, a large number of projects are interrelated. Interrelated projects can share a common objective, but can also share some common financial aspects such as Budget.

In Sciforma, the Project Budget can also be managed through Contracts (for Hierarchy Connections only).

A Contract represents the terms agreed upon by the Manager of the Source object and the person who is in charge of the connected object (Target objects) in regard to timeframe, budget, and deliverables.

Thus, Users will have the opportunity to delegate parts of the budget to sub-projects and work packages from a Source object. Here again, only Cost Centers that have been defined at the Source object level will be available to define a Delegated Budget.

If the Project Budget is related to Contracts, it will be computed as follow:

The Project Total Cost will be adjusted and computed as follow:

Let’s take the following example where a Product, a Program, and a Project are connected:

We want to track the budget and costs at the Product level. 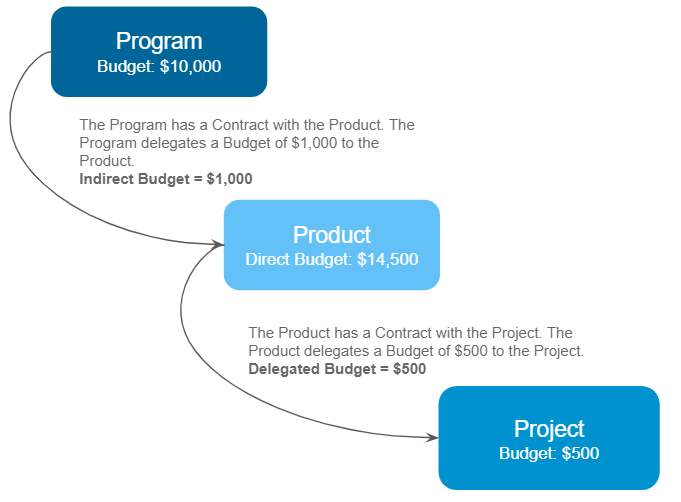 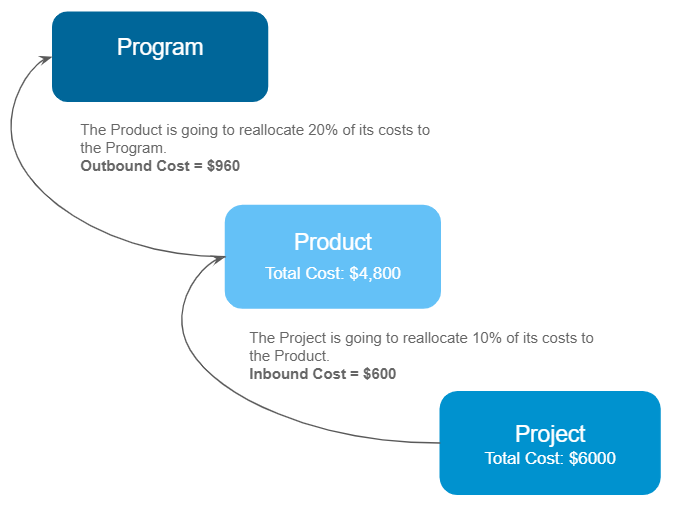